The Use and Misuse of Advertising Research

I came across a research study recently that further demonstrated the challenges in advertising development and measurement using research.  The study compared recall of an advertisement between two controlled groups, one which was previously exposed to an ad and another which was never exposed.  Twenty percent of those never exposed recalled seeing it previously.  I guess I shouldn’t have been too surprised since my own ad recall research over the years has shown even greater levels of recall of a brand’s advertising that did not exist.  When you consider this along with the reminder from neuromarketing that 85% of our mental processing and purchasing decisions occurs in the subconscious, how much weight do we put on the literal results of advertising research to make major decisions?

To get a sense of how other marketers and researchers feel about this, I posed the following question to the Brand Management and Marketing Research Professionals groups on Linkedin:

“Is is valid to use focus groups to select winning advertising concepts?” 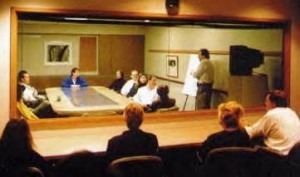 Based on 15 responses to the question and some blogs I found pertinent to the topic of advertising research, here are some insights gleaned from industry professionals.

Professionals agree that focus groups used properly can shed light on message comprehension and relevancy while identifying red flags.  Additionally, they agree that groups should not be used to make final concept decisions, but rather to guide and develop.  Perhaps the word “test” is getting in the way of using the research properly.  Unlike a test where something passes or fails, we should refer to this type of research as concept development.

Research is a systematic study where objectivity opens the lens to true learning.  There is no other form of research where objectivity is challenged more than in the interpretation of qualitative research results.  The observers behind the mirror are generally not researchers and objectivity if not vital to their discipline.  As such, conclusions can be made too soon and without consensus as we all hear things a bit differently.  Later in the report, the caveat that “the results are qualitative and directional only” often is ignored.  It is the role of the person leading the project to take a strong position in bringing objectivity and the directional value of groups to the table.

From the point of view of an advertising agency, we have a love-hate relationship with focus groups.  We believe ideas can be developed further and become more impactfull when discussed with the target audience.  Some ideas, however, reach maturity sooner than others and are “put to the test” too soon, and dismissed.

There is a human aspect to groups, both in front of and behind the mirror that makes them a powerful and enduring tool that must be used very thoughtfully and realistically.

Do you think advertising research is more a science or an art?