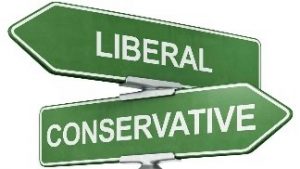 While the above descriptions are “tongue and cheek,”  the conversation today seems to be evolving rapidly into this direction.  There is a closed-minded, lack of effort for one segment to understand the other. The preference is for each segment to reinforce its own profile and view of the world.  Why?  We spend an incredible amount of time and money as marketers trying to objectively understand and relate to consumer market segments.  Is it because we want our brands to be loved?  Do we put brands at a higher level than ourselves?  Or is it because the differences between Liberals and Conservatives run deeper than any consumer segments?

The worlds of social science, psychology, and even neurology are engaged in better understanding these segments in the hopes of breaking down at least some of the barriers. Social science suggests that Liberals and Conservatives have distinctly different personalities that drive their values.

Liberals for example, are more open and flexible, while Conservatives are more conscientious.  Liberals see themselves as creative, tolerant and open to new ideas and experiences.  Conservatives are more thorough, careful, orderly and moralistic.  The translation of these personality traits into political views is obvious.

If it is all about personality, than our side of the political spectrum is established very early in life even before we care about politics.  And, it is unlikely to change unless for some very dramatic outside events (like 9/11).  Some research also suggests that one’s DNA also plays a role in personality and therefore in life and political values.  The long and short of it is that our political segment affiliation is deep-rooted in our personal “brand essence.”

To no surprise, neurologists take this theory a step further citing differences in the physical makeup of the brain contributing to one’s propensity to view the world from the “left” or the “right.”  In other words, Liberals and Conservatives have a different gray matter between their ears.

The segment divide is becoming greater because fiercely arguing values and policies seeps into deep-rooted personality encounters.  You can challenge my political opinions (lovingly), but do not challenge the essence of who I am.  Instead, make your case based on how I view the world.  We do that in marketing with consumer segments every day!